NaNoWriMo: Write What You Know

We writers are often told to “write what we know,” which usually means that we should write based on personal experiences.

But how does that work when you’re writing a medieval fantasy story? Or a historical fiction piece set in 1885?

Welcome to Week Two of National Novel Writing Month (NaNoWriMo) at Scintilla Studio! I’m your writing guide, Seth, here to dig into the old maxim “Write what you know.”

As we head into Week Two of NaNoWriMo, I find myself sitting at a word count of over seven thousand–I’ve managed to get ahead of the curve, which surprises even me. Writing this novel is one of the most challenging things I’ve ever done, and not just because of the self-doubts that I mentioned last week.

In part, it’s because I’m pushing myself and not writing what I know.

My protagonist is a teenage girl on the cusp of adulthood (which I am not), visiting the port city of Bristol (a place I’ve never been), and manages to acquire supernatural powers through a freak accident (which I’ve never done). And the story is all told in her voice, through her eyes.

There is no way that I can personally experience most of those things, so why in the world am I trying to write a full-length novel about them?

This is where “write what you know” is a little different from what you might think.

In my experience, “write what you know” is a twofold concept–it is writing from personal experience, but it is also writing based on outside knowledge. 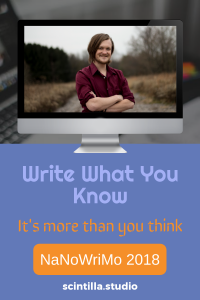 Let me give you an example–while I am not a teenage girl, as my protagonist is, I have firsthand experience with things like depression and trying to live up to the expectations people whom I care about, both of which are major parts of her character arc. I understand what she feels, I know how she would act because of those feelings, and I’ve seen the kinds of things other people do in response to those actions.

In that sense, I am writing exactly what I know. When I write a character, I am basing my characters’ personalities and interactions with each other on things I have observed and experienced in my life.

When it comes to setting, on the other hand, I have found no substitute for research.

I mentioned that supernatural powers have a strong presence in my story, and it’s here that the other half of “write what you know” comes into play. If you’ve listened to the GNAPcast at all, you’ll know that I’m a huge comic book and fantasy geek. I obviously don’t have supernatural powers (or do I?) but I have read enough about those elements to easily incorporate them into my NaNoWriMo project.

I am still able to write what I know in an intellectual sense. “Write what you know” is an invitation to learn more.

I’ve always been a voracious reader, seeking inspiration and excitement in every book I could get my hands on. Science-fiction stories by Timothy Zahn had elements that inspired me, and so did the neo-folk tales of Neil Gaiman. I even found inspiration in an old U.S. history textbook, which eventually influenced the parallel world of Terra in which my NaNoWriMo novel is set.

My point is, I used what I knew–the things I had read about–to inform the elements of my novel that I had no way of experiencing.

So what does that mean for you? Well, if you have your heart set on writing a medieval fantasy story, read medieval fantasy stories. If you want to write a story set in modern-day Cairo, read some tourism websites. Yes, you heard that right. They won’t give you all the details you need, but travel sites can be invaluable for getting a sense of culture, important locations, and yearly festivals that may become plot points for your story.

Between basing characters on personal experiences and arming yourself with useful elements through reading and research, you should be more than ready to “write what you know” for NaNoWriMo.