Multiclassing in Everything: How to Make the Worst Character in D&D 5E

“What are you playing tonight?” my party asked as I set a bulging tote bag on the table.

“A Barbarian,” I said, smiling.

“So what’s the ukulele for?”

Dungeons & Dragons’ Fifth Edition made multiclassing much easier than previous editions.  Too easy, in fact. One summer evening my Dungeon Master (DM) and I took this to its logical conclusion: “Could you take a level in every class?”

I filed this in the Bag of Holding marked “never going to happen.”  Then one of the players in my regular group, frustrated by waiting months for high-level features, offered to DM a one-shot adventure with 15th-level characters.  “And yes,” she said, “You need to multiclass in everything.”

So was born Maxwell Minimus, the Everyman, a Frankenstein of a character with at least one level in every player class.  I haven’t multiclassed a character since.

Here’s a practical guide to multiclassing in everything.*

*As a note, this guide is based on the Player’s Handbook and excludes additional races or subclasses from Volo’s Guide to Monsters or Xanathar’s Guide to Everything.

What else but human?  A +1 to every stat gives them the highest total starting bonus in the game, and we don’t need to be specific to any one stat.

In order to take a level in a given class, we need at least a 13 in its primary stat – Charisma for Warlocks and Sorcerors, Dexterity for Rogues and so on.  For this build, we need a 13 in everything except, oddly, Constitution.  Using a point buy instead of the standard array we can afford a stat block of 11-12-13-13-13-13. Adding the racial bonus, we have just what we need, if we put the 12 in Constitution. I left the 13 in Intelligence, since most of the level 1 spells that use that stat arcane casters are focused on utility instead of attacks or saving throws.

Keep in mind that ability score improvements are fourth-level class features.  With 15 levels to work with and 12 classes to cover, we won’t ever get one. Settle in, friends – this is us for life.

The character we’re building has literally no special skills comparative to other adventurers at this level.  I figure the most likely way for someone in the general medieval fantasy setting of D&D to get that way is to come from privilege, so Noble it is.  This also leaves us with the most starting wealth to work with.

For a one-shot, starting equipment is a pretty fluid option; often it doesn’t even come up unless you can find a clever, oddball use for it the DM might like.  In either case, you’re best off taking the starting money rather than an equipment pack, especially since you’ll need a variety of components and focuses for the spell-casting classes.

Here’s the full class list for a level 15 all-class build, given in order of acquisition.  The subclass options are given in italics. I’ve chosen the order and subclasses for the utility of their low-level features, and for the maximum number of skill proficiencies possible.  Notice that I’ve taken the non-casters first and the casters second, with Wizard being first of the latter group.

Every spellcasting class has the option to just add a number of cantrips to your list, and there’s no restriction on the number of total number of cantrips you can know.  Always pick the class’ signature cantrips – Vicious Mockery for Bard, Sacred Flame for Cleric, Mage Hand for Wizard, and so on.

Choose spells whose damage scales with your character level and utility spells.  Your save is too low to do any real damage, so focus on ways to mess up everyone’s life.  Some highlights include Ice Knife from the Elemental Evil Player’s Companion, Hellish Rebuke, and Sanctuary.  Here’s the full list I chose, in alphabetical order:

It’s spreadsheets all the way down!  In order to make sure I wouldn’t forget a feature or modifier in this most hectic of games, I created an Excel sheet that listed:

If you’d like to see these spreadsheets, I’ll release them on Google Drive – let me know using the tweet below!
Hey SparkOtter, I need those spreadsheets so I can multiclass in everything!Click to Tweet 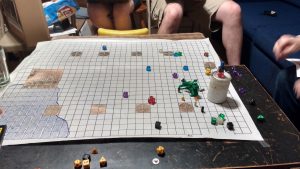 In terms of game mechanics, this character was a total failure.  This is literally the worst idea. My attack bonuses weren’t high enough to land a hit, and my spell DCs were too low to compel epic-tier monsters.  I ended up juggling ki points and Wild Shapes to put pressure on the dragon we were fighting, in order to leave space for the well-built characters in the group.

From a roleplaying standpoint, on the other hand, the character was a roaring success.  The night of the one-shot, I showed with my tote bag full of props, ranging from a big furry hat to wear during Barbarian rages to a ukulele for inspiring the party.  I had a spectacular time copying other players’ turns, and they had a great time doing their things better.  Shout out to our Bard for turning me into a T-rex so I could bite the dragon.  I love D&D.

And of course, I added a tragic backstory.  A high-level wizard abducted Maxwell from his quiet life at the monastery in an effort to craft the perfect adventurer.  The poor man’s continual failures meant that about once a year, the wizard would recall him, wipe his memory, and send him out to adventure in a different discipline.  The result of the process is a man who can only remember certain years of his life while using the skills he acquired during them.

What do you think?  Do you agree with my choices, or would you have built this character a little differently?  Let me know in the comments, and tell me if there’s a rules lawyer or a power gamer in your group who would enjoy the challenge!

This isn’t the only mad idea I’ve pulled out of the “Never Gonna Happen” bag of holding so far.  Subscribe to Scintilla Studio for more RPG stories and resources like this one.