Rebecca: Hold on. I call false play. This is Alufi’s Advice Corner, not Silas’, “butt-his-head-in” corner.

Steve: Well, let’s see. Maybe it asks you something too.

Steve: I know you read the broadsheets.

Lucas: Maybe you’ve seen my byline: Thresher Cain, investigative journalist. I’ve got a story I need published, but the Korranberg Chronicle won’t take it and I don’t trust the Sharn Inquisitive with it. You and Alufi  are my last hope. Now this “gnome mail” thing is new, so I think it’s safe to trust it with this much. There’s a Warforged 100 feet tall in the morn lands. Now I’ve been putting the pieces of this one together for months, and believe me, if the wrong people get a chance to spin it, it could make things even harder for the ‘Forged than they already are. You two are maybe the only outlet I can trust to handle this story in a way that doesn’t start a gold rush or a riot against the ‘Forged. And if you’re reading an excoriate’s prayer off a cloth, live on the airways, you might be crazy enough to do it.

I’m leaving town soon, but I think this g-mail thing can reach me before I do, so don’t wait – this tip is as hot as it gets.

Steve: Also, Alufi, there is such a thing as werepigeon. 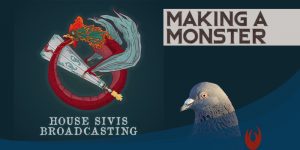 Lucas: Hello, and welcome to making a monster, the weekly podcast where game designers show us their favorite monster and we discover how it works, why it works and what it means. I’m Lucas Zellers.

This week’s episode was originally planned to be a bonus episode, but it ended up being exactly the kind of conversation I would have had on a mainline episode anyway. So let me explain what you heard in the opening narration: the character voices you just heard belong to Silas d’Sivis, Alufi Haskal d’Sivis, and their new monster correspondent, Thresher Cain, a character I’m playing on the House Sivis Echoer Station podcast. And let me tell you why I’m so over-the-moon, excited to share this with you. House Sivis Echoer Station is an unofficial fiction podcast for the Eberron campaign setting, built around the accidental discovery of broadcast radio.

They’re doing something utterly unique to the D&D podcast space by bringing NPR to D&D, and I think the rest of Making a Monster will tell you why I just love that whole concept to bits. Their show is hosted in fiction by the two gnomes Intrepid enough to capitalize on the magical fluke of so-called “broad casting”, and in reality, by Steve and Rebecca, who have between them a well of creativity, infectious laughter, and great chemistry.

After months of scheduling havoc, we finally connected this week for a three-hour conversation that still feels a little surreal, because we are genuinely such a big fan of each other’s work.

During that conversation, we talked about their show’s running gag, the “were-pigeon,” and the things that my brain shouts at me instead of just enjoying the joke.

I’m here, because I have been relentless in, in hounding these two to get on this show because I love what they’re doing. I love the experience of listening to the show, being a part of it on the back end as an audience member, and, uh, and now as a guest. This is wild. So, really glad to be here.

Steve: Well, we are glad to have you. Yeah,

Rebecca: it’s not hounding. Cause I’m like the moment I listened to Making a Monster, I was like, “How can we get this man?”

Speaking about talking about ourselves. Um, you, you briefly said something, uh, that I am going to have to, uh,

Rebecca: Um, you said something about having issue with just putting the word wear in front of any creature.

Rebecca: Yeah. And I’m just saying, were-pigeons are valid. No. I mean, no, right

Lucas: okay. Okay. So, all right. So here’s the, here’s the official PR response.

There is a home in this game for everything and it’s for someone I tend to want. Something more rigorous out of the monsters that I put in my games and maybe want is the wrong word. Like I expect that out of them, if there’s, if there’s a dragon in my campaign, then I want it to say something about greed or power. 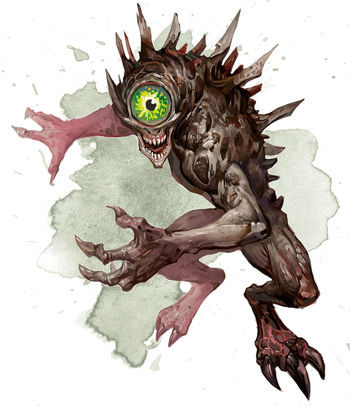 D&D’s Nothic, a whispering aberration and keeper of secrets.

If there’s a nothic in my campaign, I want it to say something about secrets and the way that we treat them. So for me, I’m very much a purist when it comes to lycanthropes, cause I think it’s, it’s. They meant something, uh, and that meaning was a lot more impactful at the time that legend was originated.

That being said, that’s what I like and I expect, and I want, and how I play my game. The beautiful thing about this is, and the reason I have a podcast is, that all of these monsters mean different things to different people, and they can give you something satisfying and meaningful and helpful, even if they’re not true to the original source material of the monster, whatever that happens to be if it even exists.

Steve: Uh, why not? I will tell you why not.

Steve: Absolutely not. I’m willing to deal with so much stuff. Uh,

Steve: At one point in time was looking for an artist to do ancient medieval drawings of were-pigeons

Lucas: Okay. So this is why, what you’ve done works. And B no, this is true. This is why, what you’ve done works. It’s the exact, it’s the exact tension that I have, because what I want is a, is a, is aware creature that like has teeth and, and, and will scare me and will make me ask questions about who is man and who is monster here? Like, that’s what I want. And that’s what it carries with it. So for you to come in and say, what if it were this stupid looking bird that lives everywhere and poops out everything? What if it were that? Um,

Lucas: It’s not funny if, if we didn’t have the werewolf first, like if I were coming into this going, no, make me like a thing with teeth, that’s scary.

You’re like, what if it’s this stupid looking, whatever. That works.

Lucas: I got to do the definitive Making a Monster take on lycanthropy? Why’d you make me do that?

Um, because a lot of people say that likened throats, um, should, or can only be, um, of creatures that, um, Historically humans have had fears of, so tigers, werewolves, rats, ravens, boars, stuff like that. Um, but then here I am coming in. Uh, well, um, a lot of people are afraid of seagulls because they are monstrous, they are genuinely terrifying.

Steve: Hmm. Or the, uh, there was the argument that they can only be mammalian, uh, that they cannot be avian. And that got into a lot of questions about like the were-porpoise.

Lucas: The were-platypus, if you will.

Steve: Oh my God, the were-platypus, what a nightmare. So they already look ridiculous.

Steve: A were-bear, but it’s a koala.

Lucas: Well, gosh. Yeah. Yeah. I mean, we’ve, I mean, we, we might’ve done it because like that’s a great point. You have to be afraid of the creature.

It has to be, uh, it has to be something that counts as an antagonist, as a, as an opposing force, as a monster, as part of the unknown. And if it’s not, then it doesn’t feel like a monster should, um, But, you know, then there’s the other argument that a way where, what if, like, how do we, how do we, how do we classify this?

Is, is this idea built out of its constituent parts, a person that turns into some kind of animal or is it built out of the layers of meaning that that person and that monster have associated with them?

Like just ridiculous stories. Uh, you know, you have to wonder exactly what it is, where the line is.

Lucas: Yeah. And if you look at a Platypus, I mean, that’s a chimera creature. There are loads of monsters that are just made out of bits of other creatures and that’s what makes them monstrous. Um, so

Steve: I wonder what, what a Platypus qualifies like I’m like, where’s the line on that one too? Yeah. W

Rebecca: why can’t we have were-manticores?

Steve: A were-mera? Oh my God. Like a werewolf chimera?

Rebecca: Um, if you, if you do decide to, uh, To do a deep dive into werewolves, uh, or like in therapy or, or shape animals, sheep changers in general. Um, there is a tabletop RPG called Turn by Brie Sheldon, um, it, uh, It delves into, um, kind of like the dual life of someone who is both an animal and a person and having to, um, like, uh, move around in both of those social structures, 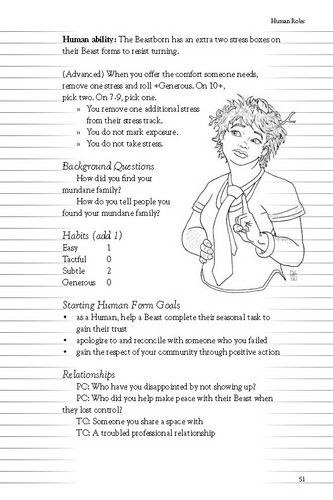 Steve: Deal with that plurality.

Lucas: To manage the beast within,

Lucas: To borrow from Eberron. I, you might be surprised to hear this, Rebecca. I think we might’ve just, am I going to get a copy of this audio? Oh, absolutely. Yeah, I think we, I think we maybe just did the episode, I think

House Sivis Echoer Station releases today with an episode about the Mournlands, featuring Thresher Cain who recently returned from hunting down a Warforged Colossus near the Glowing Chasm. And if you want, you can double back and listen to episode three of Making a Monster to find out what that is and why it’s so captured my imagination, but you don’t have to listen to any more of my show to enjoy this well-edited 30-minute fiction podcast for Keith Baker’s Eberron setting, so don’t wait – follow the link in the show notes and tell them Thresher Cain sent you.