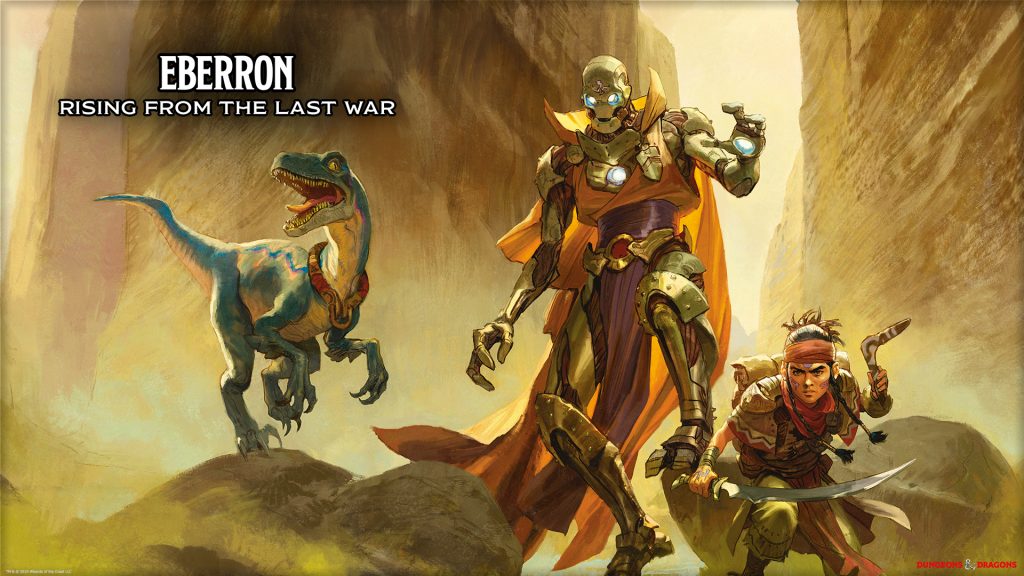 A raptor, a Warforged, and a halfling adventurer stand in the canyon of a savage land of Eberron.

The Eberron campaign setting for D&D treats its monsters and monstrous humanoids differently. It’s a rich vein of inspiration for the Making a Monster podcast!

While most of Dungeons & Dragons takes place in a familiar medieval fantasy world, Eberron asks what would happen if that world had aged through an industrial revolution. Science fiction author Arthur C. Clarke once wrote “Any sufficiently advanced technology is indistinguishable from magic.” In Eberron, sufficiently advanced magic is indistinguishable from technology, with elemental-powered trains, wandslingers roaming the dusty frontier like it’s the Wild West, and magical constructs just leaving the role of robot soldier.

First released for D&D 3.5 in April 2004, Eberron is the brainchild of game designer Keith Baker. It gained a devoted following for the way it extended and subverted common fantasy tropes, as well as the many unique elements it added to the game. Originally released for 5th Edition with November 2019’s Eberron: Rising from the Last War, the setting made its mark on the rest of the game when its unique class, the magi-tech Artificer, was added to the base game in Tasha’s Cauldron of Everything.

Eberron looks at its monsters and monstrous humanoids from a more nuanced, cosmopolitan point of view than the “default” Forgotten Realms seting of D&D. That point of view has been a source of inspiration for the Making a Monster podcast since the beginning. Explore the vast world of Eberron with these episodes!

Designer Steve Fidler combines monster and dungeon in the Warforged Colossus, appearing in his 2020 release Mythic Eberron. This 10-story engine of war wandering the apocalyptic landscape of the Mournland is easy to read as a metaphor for the nuclear bomb, much like Godzilla. We also look for the line where antagonists in D&D stop being “people”. “I like using robots for that,” Steve says.

Working on the Warforged Colossus got me in touch with House Sivis Echoer Station podcast, a fiction podcast about the first public radio station in the Eberron campaign setting. In character or out, hosts Steve and Rebecca are lovely people and have become great friends of the show since we first met around Christmas of 2020.

Kalashtar are humanoids bonded with spirits cast out of the Dreaming Dark for rebelling against the voracious, power-hungry Quori. Across the Sea of Rage from Khorvaire, on the continent of Sarlonna, in the country of Rierdra a war is brewing. The elite ruling class of Inspired use their psionic magics to oppress and exploit their kalashtar subjects. Sometimes the stress of resisting that magic can break the bond between a kalashtar and their dream spirit, creating a shattered being hovering on the edge of insanity.

I’m so excited to have spoken with Imogen Gingell: space scientist by day, game designer by night, and co-host of the Manifest Zone podcast. She showed me the themes and questions embedded in the shattered kalashtar as they appeared in her Eberron supplement Codex Siberys: Mourning and Madness.

United together in the Dhakaani Empire and given a rich history and culture, Eberron’s goblins transcend the role of first-level punching bag to which most  fantasy games relegate their goblins. DM’s Guild designer and podcast host Matthew Whitby also pushed the limits of what a goblin could be in the final episode of Season 1:

Level up your Eberron Game on the Making a Monster Patreon!

These designers were kind enough to release stat blocks of their monsters for Making a Monster listeners, and you can get them by signing up for my email list or joining the Making a Monster Patreon at the Hobgoblin tier or higher. I’m so excited to share these creatures with you!