This is a quick bonus episode ahead of Mondays release on Fizban’s Treasury of Dragons with one of the cool kids, Amy Vorpahl. She was extremely generous with her time and offered to do a “Making a Monster lightning round” on the monster she created for Candlekeep Mysteries. 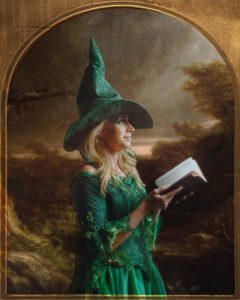 Amy Vorpahl: You’re walking through the Candlekeep Libraries you descend, down a circular staircase and you hear the, tippety- tap of metal on stone and you look down and you do see a metallic, almost like a dog, but with way too many legs for a dog, almost like a spider, it’s kind of scorpion-like, almost crab-like, but kind of cute. The heads almost look like cute pit bull dog headed things. And when you see two of them together, they don’t look dissimilar, but they’re not of the same ilk either. So you’re kind of immediately charmed except that their tails on the back, they stick straight up and a little spark of electricity sustains at the end of their tail, almost threateningly like a scorpion’s stinger. They don’t seem to notice you immediately, these two, uh, almost dog sized creatures, and they do seem to be tending to their own business, but also something very specific within a carved out part of the wall on the opposite side of where you are. They made their nest in a naturally formed cavern in the wall. And they’ve got a couple of about a third of the size of them. A couple of little, little babies! They’re also made of metal. So how did these things reproduce? I don’t know, but maybe it’s magic! Um, and then these are even more adorable. If cockroach dogs could be adorable, they sure are. But they look like really good parents actually.

Lucas: That’s beautiful. I’m there. And I’m also thinking like electric in a library? We’re going to burn the place down!

Amy Vorpahl: Yes, except, good call. I ran my Candlekeep mystery, called Kandlekeep Dekonstruktion spelled with all Ks, uh, for, for two different groups of people. And one of them did want to, they were like, after this, we’re just going to burn it down. And there is a clause. It was Chris Lindsay and Hannah Rose who described the entire Candlekeep and there is a clause in there that any fire larger than a candle flicker is magically put out. Because of course it is because it’s a magical dang library. They’re not going to take any risks. So yes, while electricity can cause a lot of damage, it actually will not start at least not a real fire. You can still cast your magical, you know, fireballs and stuff like that, but a real, real fire that could actually damage books. uh uh, that’s not gonna happen. So no

Lucas: Let me see if we can do the lightning round on the skitterwidgets. One of the things that I love it when people tell me are like, it’s just a monster. It’s just like, so you can smash it and be the hero. And sometimes people just tell me, like, it’s just cute. Like we just want to give you something that you can adore. Is that the role that the skitterwidgets fill or are they for something?

Amy Vorpahl: No, I, I guess it was the first thing that came to mind. I guess you’d have to read the adventure, but there’s a lot of kind of hints at mechanical sci-fi in my adventure. And so I wanted the first monster that came to mind was Modrons, which arguably is my favorite monster because they are just the, they could just be totally, totally innocuous and silly and dumb.

But also maybe they can help and maybe they’re, they’re like hobbits, they’re like stronger than you think. So I love Modrons. So I wanted something like that. Something small that could perform tasks, but also could fight if you needed them to. And then I did really want them to be cute because I think that was influenced by just playing a lot of Pokemon Go. And I really liked, I really liked the idea of monsters being adorable, and then they fight for you. So they are cute.

I also, I don’t know why I wanted them to be parents, but I did. And one of their feats is Good Parent. They can, uh, they can impose disadvantage on one attack, roll made against a kittywidget, which by the way, the children of these parents are called kittywidgets. that cute? They didn’t change those names. I don’t know why they didn’t. Um, it’s canon now.

I think I really wanted it to have children just so I could have the name skitterwidget and kittywidget. I think it was really a lexicon based decision. Um, and I, initially when I was writing this adventure, I gave the kittywidget a stat block and Chris Perkins said, “Amy, if you give the kittywidgets a stat block, that means we’re kind of allowing and almost encouraging the players to kill babies. I don’t know if that is the right choice. We should probably just make them non-combatants.”

And I was like, “oh my gosh, totally let’s do that. Non-combatants.” So the way that this process works is a first draft. Then you do a second draft after notes, uh, and then you’re off to the races and they either love it, or they don’t, they may or may not put it in the book. That was how it was, uh, clarified to me. Then, then they take it and do their whole Wizards of the Coast thing. They may or may not change the adventure that you wrote. They’re definitely gonna play test it with their own play testers. And then the next time I see it, it’s going to be the printed version that everyone has okayed.

But I, I didn’t have my hands on it throughout that process. So when it was printed there, the kittywidgets were back with stat blocks. And Chris Perkins told me it was because in their play tests, players tried to kill their frickin kittywidget. So I just want to say that my instincts were dead on to kittywidget stat blocks. And they do canonically have stat blocks now.

There’s also here. There’s also a way, they’re like shield guardians. They’re controlled by wearing like a shield guardians controlled by, its owner, having a collar and the collar wearer can communicate small commands to the shield guardian. In this one, the skitterwidgets are controlled by, rings and they are all constructs that were built by one of the characters in this adventure. So, yes, while they are canon, they’re not running around everywhere. Like this character is responsible for making them, I guess. So if this character doesn’t exist in your Forgotten Realms, the probably don’t exist in your Forgotten Realms, which is totally fine. But boy, give it a shot.

My inspiration does really only come from the games I’ve played, like, it’s less from Forgotten Realms lore and more like, oh, I want this to be in D and D lore. Can I? And Chris Perkins was like, “Sure.” He’s was like, “Okay, great.” Although my, my adventure is the only one that takes place actually in the Candlekeep. And I did kind of mess with the Candlekeep.

Amy and I talk a lot in the upcoming epsiode about the vastly different kinds of writing needed for D&D and her previous writing gig Dungeon in a Box, and how she manages them all as a writer. Here’s her advice to DMs about mystery adventures:

And that is not what you should do. You have to tell the DM what they’re dealing with immediately. Writing for D&D is very different from writing Dungeon in a Box, because the writing for that is a little bit more, we know you’re not going to play this exactly as written. So here are some ideas. D and D however, is, is written as if you might be playing this exactly as written.

I need to give you every single- exactly how it’s lit, exactly the stats for everything, including this door, you know, like it’s, it’s very, yeah, like you said, it’s like writing an Ikea manual and you’ve got to be really specific and, and not only like, I guess, visual as well as, you have to be the dungeon master and the player.

You have to also discard your ideas of what hypothetical’s could be. And I say that lightly, because at the end of my adventure, there are about five hypothetical of how, of how it could end. But in the, in the actual adventure, you can’t write or plan what the players are going to do. You can just build the Ikea playground and hope for the best. So yeah,

Lucas: If you enjoyed this episode, please follow the show wherever you get your podcasts and rate and review because on Monday I will have a shiny new, full length episode with Amy discussing Fizban’s Treasury of Dragons. We’ll cover Fizban as a character, the old man voice that lives in all of our heads, the reason D and D source books come with guide characters and Amy’s tips on writing. So don’t miss it!