One of the most iconic creatures in Dungeons & Dragons is a civilization so alien, so otherworldly, and so evil that opposition to them defines entire cultures. “A Mind Flayer is already a creature that’s beyond reason,” says Bryan Holmes, Forgotten Realms expert and best-selling DM’s Guild publisher. “It’s from an alien plane and it can just walk into your mind. That’s in and of itself terrifying.” But they are, at least, a civilization, one with its own rules.

How much more dangerous is a monster willing to break the monsters’ rules?

If you liked this story and you want Itzigratz the Illithid Lich to lurk beneath your own D&D game, Bryan has offered the full stat block for free to listeners of this podcast – just tell me where to send it!

Itzigratz the Illithid Lich appears in Mythic Encounters, available on the DM’s Guild. To understand this monster we’re going to have to go deep into Forgotten Realms lore – subterranean, in fact, to a place so recognizably Dungeons & Dragons you might know it as the Upside Down. It’s the horrifying subterranean world of mushrooms, mildew, and monsters where nothing is as it seems – the Underdark.

What is the Underdark?

“The Underdark is a constantly changing, shifting maze of tunnels,” according to our guide. “If you look at a map of the Underdark, it’s never going to be useful. It’ll tell you there’s a city over there, but it’s never going to tell you how to get there. You realize that you’ve gone too far when. The walls start glowing with purple light from mosses and funguses that are so far below the ground, they’re not getting sunlight, their light comes from magic. You might be following along a tunnel, you think you’re going the right way and an umber hulk five minutes ahead of you has already, reshifted all these tunnels and you’re just going in circles and now you don’t have a way back out.

“The creatures that live down there are perfectly suited to living down there and they have to contend with things like mind flayers and even beholders. – very, very dangerous creatures. If a singular version of that creature, can’t take out a mind player. Chances are it lives in a society like the Duergar, who have to form these fortress cities to hold back that evil.”

Those cities might also belong to the Drow, gray-skinned subterranean cousins of the elves, or the deep gnomes, charmingly called Svirfneblin. Often, though, those cities aren’t enough to stop the mind flayers.

Even Mind Flayers have rules

Illithids are their proper name. but mind flayers are what most people call them. Any one of these extraplanar beings is extremely intelligent, but what’s worse, anything one knows, they all know. Each mind flayers in a colony is connected to a hive mind called the Elder Brain. The raw mental energy of this connection is called psionics, a power strong enough to rival arcane magic. In fact, the Elder Brain itself hates magic,

So what if a mind flayer desired secrets of power only found in arcane wizardry, secrets so great they could never be learned in a single lifetime? It might perform a ritual of ultimate blasphemy – sacrifice its body and trap its own soul in a phylactery to become the greatest and most feared of undead sorcerers – a lich.

“For an illithid Lich to exist, it’s sort of an abomination, even in their own culture,” says Bryan. So was born Itzigratz.

How a Mind Flayer becomes a Lich

Bryan goes into full story-telling mode to give us the flavor text for this creature.

“When Itzigratz first became a lich, he took it out on the colony of mind flayers that he once belonged to, but their colony didn’t exist close to any food source. So he took the lair of an ancient drow city that had fallen to a calamity. It’s a ghost city and that’s both literal and figurative. The souls of those trapped ghosts fed his phylactery for a while, but it wasn’t enough. And so he started seeding rumors that the city had been found, because it was considered lost. And so drow would continuously send out raiding parties and that gave him a good fuel source for his phylactery. But as he killed them, he learned how to control their souls.

Mythic Encounter with an Illithid Lich

Mythic Encounters is available on demand from the DM’s Guild – click the image to support Bryan and the show through my affiliate link.

Mechanically, Itzigratz is a top-tier monster with a challenge rating of 22. “The whole point was to try and give, uh, give DMS a monster for those groups that just feel like nothing can stop them,” Bryan says. “Because it’s a mythic encounter when you get him down to zero hit points, all the ghosts that are with him become mind flayer ghosts. His mythic actions are the elder brain, the alhuns, and the illithids that he took the souls of. And so the second half of his fight becomes you battling his old colony.”

You may remember Mythic Encounters from our episode on the Warforged Colossus – it’s a new trait for monsters in D&D that adds a sort of second phase to the boss fight.

“I had made a black dragon Malisor Rex,” Bryan remembers, “who was the dragon from an older module called Dragonspear Castle. When he triggered his mythic, he got six legendary actions and he just went all out. A dragon that’s got seven actions per turn is a lot. And I thought, well, that’s cool, but that’s physical. What would happen if he took a completely cerebral creature, used to controlling the battlefield and gave them seven actions?

“Itzigratz has a huge repertoire of magic spells it can cast. Once its mythic trait is triggered, he gets more armor class because ghosts are protecting him. Six mythic actions mean those ghosts all around him are able to fly through and attack the player characters as they’re trying to kill this guy.

Mind Flayers should be a different kind of scary

“Anything intelligent in the game should be kind of terrifying because the DM can just say, Oh no, they’re too smart for that. This is the plot they pulled. Right. So as a player, you kind of want to be on your toes. And then again, that spell casting, that hammers you hard and seven actions. That’s a lot of spells. Hopefully your players have heard about him, hopefully they’ve prepared. They understand what it means to go against a mind flayer and a lich. And then once they go in there, they just hope for the best.

“A smart creature like this should always have a plan. Itzigratz kind of wants to be left alone to grow in power. So what happens to your players? If you just let that power fester, they could leave him alone and he’d be happy to say, okay, goodbye, just leave, and he would be okay with that.

But then, you know, that there’s this pit of evil, just growing under your feet. And eventually, he’s not going to be content with just sitting still. If you don’t take care of it, now, he’s lived a very long life and he’s going to continue harvesting souls until someone eventually stops him. And if it’s not the drow it’s going to be someone else, when that food source runs low it’s just like a dragon, he comes in like a force of nature.

“It would affect a lot of souls. Maybe you have friends in the Underdark like the Svirfneblin, the deep gnomes – they would definitely, you get caught up in it. And that’s not to mention that it’s a creature that wants arcane secrets. So if we’re talking Faerun, it’s wandering the Underdark. Maybe it gets bored and starts going towards the Anauroch Desert – there’s Sharn trapped under there, another horrifying abomination. It can tap into these elder evils that existed in the world, just because it’s bored.

“If you want something a little more personal, it attacked its own mind flayer colony. Well, if survivors happen, do they know that they can’t take Itz on without help. So having mind flayers come to you, asking for assistance could be a really interesting way to just flip that on its head.”

Remember you can download the full stat block for Itzigratz the Illithid Lich by joining the Making a Monster email list here – be the first to get new episodes and see podcast extras like this one!

You can also support Bryan on the DM’s Guild by checking out the recent project where Itzigratz appears, Mythic Encounters. “Mythic Encounters was a book that I worked on with Steve Fidler and E.R.F. Jordan, go check them out. They’re fantastic people. the book is a lot of fun,” says Bryan. “If you like the idea of Itzigratz but you don’t like mind flayers, there’s 35 other creatures in there to have fun with.” Buy from this affiliate link and a small percentage of your purchase goes to support Making a Monster: https://www.dmsguild.com/product/315637/Mythic-Encounters?affiliate_id=1485089

You can also catch up with Bryan on Twitter: https://twitter.com/FallenWyvern
Tag me @SparkOtter or use the hashtag “Making a Monster” to let him know I sent you.

Next Episode: Monster of the Week with creator Michael Sands! 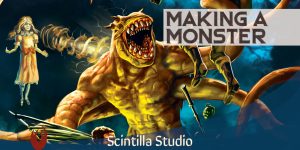 Monster of the Week is the system that powers The Adventure Zone and Critshow. The game’s creator, Michael Sands, joined me all the way from New Zealand to show you his cinematic, player-first approach to creating monster and mysteries. And we meet Marilynn, the improbable fairy creature who nearly derailed an entire playtest campaign.