On this week’s episode of Making a Monster, we turn sci-fi survival horror into campy B-movie schlock with the Space Leper Nuns from Starship Infernum, a charming, fast-paced, pick-up-and-play RPG by Robert Turk of Wicked Clever Games.

Play Dungeons & Dragons because it’s probably the first tabletop RPG you heard about. Play other games for the stories D&D can’t tell. And there are so many stories to be told.

Robert Turk is an independent game designer and 30-year veteran of roleplaying games. “I write games that are easy to bring to the table, that are not intimidating in their scope, and are fun and different to play,” he says. “Some people say my games are sort of gateway games for people that don’t normally play role-playing games that are intimidated by multiple books and having to have a college degree to do the math and all that – I don’t do that.”

Check out 5 Good RPGs that Aren’t D&D, featuring game designers themselves on Making a Monster!

Robert designs under the label Wicked Clever Games. His previous credits include Are You Mental, a card-driven role-playing game about lunatic superheroes who escape the asylum to go off and save the world; Purgatory House,  a black-jack based horror game set in an endless haunted house; and Wyrd Scouts, a game about magical kids and an enchanted forest, earning badges and exploring the wood and helping monsters instead of fighting monsters. Starship Infernum uses the same black-jack mechanic for a game set in a space station where everything is going wrong and survival is never guaranteed. While the game is built to evoke the nerve-wracking tension of survival horror, his favorite monster comes from a campy, comedic scenario that tweaks horror in the nose.

“In my head, when I see the leper space nuns, they’ve got a combination between nun habits and, like, a mummy, because they’re all wrapped up in bandages. So when the players encounter them at first, they might think they’re these peaceful ladies going about their holy business – and then the nuns turn around and try to rip their faces off,” Robert explains.

The nuns are a comedy goldmine that interacts with people’s deeply-held convictions. “Even if you’re not a religious person, I think most people have respect for that established hierarchy of people that dedicate their life to service or religion,” Robert continues. “I don’t know anybody that talks bad about nuns, even people that went to Catholic school. In the game the Leper Nuns are not evil monsters – they are basically cursed ladies who were doing good things and now will have to eat your face to survive. So they’re just trying to do what’s in their nature. They’re a holy order.

So I have found in running this game, people are very hesitant to attack the nuns. The question that it asks you deep down in your core of humanity is when does it become acceptable to do horrible things to survive?”

Role-playing games, and this scenario in particular – require a game master to constantly balance real and make-believe, comedy and truth, tension and release. It’s not an easy balance to strike. But the reward is a memorable, enjoyable experience that allows people to encounter in a safe way questions like, “How far would you go?”

“When I run a game, it is very much about the players’ experience. It’s about the story and the journey that they are exploring,” Robert says. “So I think that dichotomy – these nuns are going to eat your face, but they’re also kind of fun and funny – spins out of that naturally. We want to tell a good story. We want to have a good time. And in a game like Starship Infernum, where it does get very tense at moments and you do have characters dying, it helps to let those moments of levity have a second or two to breathe.”

If you can’t get to your local game store right now, you can find Starship Infernum on Drivethru RPG or Amazon.  These affiliate links help support Making a Monster as you do.

You can also find Wicked Clever Games on Facebook at facebook.com/wickedclever, or at their website www.wicked-clever.com. Since this episode was recorded, Robert has also set up a Patreon for his current game design project, Goblonia, at Patreon.com/thegoblinguy.

“It comes out of short stories and writings that I started doing about nine years ago, and the character that I used to play, Gandersnitch the goblin, on stage at storytelling festivals,” Robert explains. “So it’s basically a game set in his world. I’ve been working on that one for four years.”

Update, 1/16/22: Goblonia was fully funded on Kickstarter in December! https://www.kickstarter.com/projects/gandersnitch/goblonia-ttrpg/posts/3350771 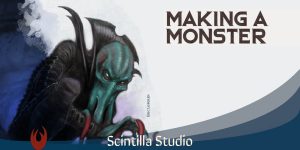 The terrifying lords of the Underdark in the Forgotten Realms draw on the magic of their own psychic strength, and have a taboo against arcane wizardry. But taboos are made to be broken, and somewhere in the vast reaches of this underground world, an outcast mind flayer lich bides his time to rise up and claim the world for his own.