Somewhere in the Mournland of Eberron, a weapon of mass destruction walks freely across the blighted wasteland. For players, the Warforged Colossus blurs the line between monster and environment – between dungeon and dragon.

Steve Fidler creates adventures and encounters for Dungeons & Dragons (D&D) under the label Vorpal Dice Press. He’s created a mythic encounter for the Eberron campaign setting based around a Warforged Colossus. “It’s a Warforged that is the size of a skyscraper, a hundred feet tall, has an entire dungeon inside of its body,” says Steve on this week’s episode of Making a Monster. 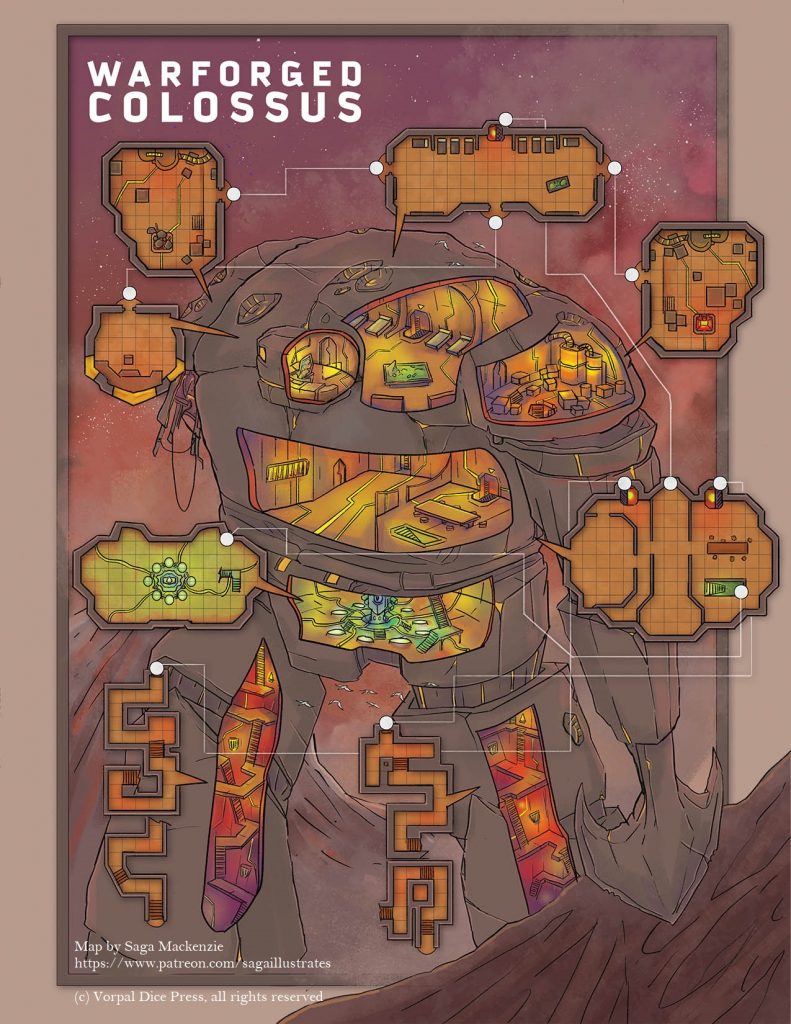 Warforged are part of Keith Baker’s Eberron setting for Dungeons & Dragons, which a bit like Tolkienian fantasy aged forward into an industrial revolution. It’s a world where people travel by magical elevators, airships, and the lightning rail. It’s also a world that only recently ended the longest and most destructive war anyone has ever seen. The Warforged are an entire species of sentient constructs designed to be soldiers in that war – and now the war is over. Most Warforged are the size of a person, but Eberron: Rising from the Last War also speaks of a small group of colossal walking siege engines lost in the Mournland. Less than a dozen of them are thought to have survived the war.

The specific Warforged Colossus Steve has designed is Arkus, detailed in Rising of the Last War as missing an arm and found in the Glowing Chasm in the Mournland. It’s designated WX-11, meaning it’s one of a double handful of Colossi left over from the last war. “There’s only 8-10 of them that anyone knows about,” Steve says.

The recent addition of mythic encounters to 5th edition D&D was the perfect way to bring these creatures back into the game. A Mythic Encounter is an optional rule for creatures in D&D that triggers a Mythic Trait, usually when the creature is reduced to zero hit points. After which, it transforms, musters its strength, or exposes a new objective—extending the fight and unlocking new powers and abilities for the creature. It was introduced in Mythic Odysseys of Theros in July of 2020.

“When you destroy the Colossus, it collapses in a heap, but then all this activity happens inside of its body. Like you can see the lights come on and all this activity and motion. An opening appears and it invites you to come inside,” says Steve.

“The whole second phase still uses the Warforged Colossus’ stat block, attacks, and legendary actions, but introduces lair actions which all occur inside of its body. It detaches portions of its body to make it more difficult for you to traverse, it squeezes you in the hallways and it spawns more Warforged inside to defend itself.”

The Warforged Colossus as Steve has envisioned it unifies D&D’s three pillars of gameplay: combat, exploration, and social interaction.

“It’s more than just a hit point punching bag – you’re progressing the encounter further and uncovering mysteries like, why is there a creation forge inside this Colossus? Who would have put that there? Why is it only making deformed Warforged and not real Warforged?” Steve explains. “It’s always looming in the distance, something the players interacting with NPCs about – a kind of carrot on a stick. When you finally do encounter it and hopefully defeat it, you’ve now got a whole other carrot on a stick to build off of. So it’s a narrative midway point for your players, always sitting on the horizon for when all the other storylines thread together.”

Warforged Colossus as a metaphor for weapons of mass destruction

Click to get Mythic Eberron on the DM’s Guild; this is an affiliate link that supports Making a Monster. Cover art by Marcel Budde.

Given the deformed Warforged it spawns and its origin story in the Glowing Chasm, it’s pretty easy to read the Warforged Colossus as a metaphor for nuclear fallout, a kind of steampunk Godzilla. It affords players a straightforward moral choice.

“I think some players like to have a very clear unambiguous, something to accomplish,” Steve says. “This is very clear cut – you know this is something you’re going to have to defeat or overcome, and there’s a very clear way to do that. I think a lot of players do just enjoy beating the bad guy sometimes.”

As a special bonus for listeners of the podcast, Steve has made available one of Mythic Eberron’s Mythic Rewards: it’s called a Salvaged Titan Chassis, and it’s a fully operational mech suit your D&D character can pilot. Just let that sink in.

Arkus the Warforged Colossus will appear in Mythic Eberron, releasing on the Dungeon Master’s Guild in September 2020. It features beautiful illustrations by Saga Mackenzie; check out some of her past work, and her professional rates, on her portfolio. You can find Steve on Twitter at VorpalDicePress or at VorpalDicePress.com – be sure to tell him I sent you. 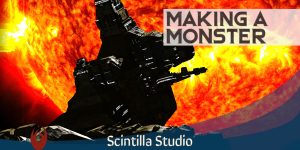 We turn sci-fi survival horror into comedy with the Space Leper Nuns. These are the campy, B-movie schlock villains from Starship Infernum, a charming, fast-paced, pick-up-and-play RPG by Robert Turk of Wicked Clever Games.