Jiangshi: Blood in the Banquet Hall is a tabletop RPG set in 1920’s Chinatown. Banana Chan of Game and a Curry talks about the myth of the Chinese hopping vampire and her Kickstarter to bring them to life.

Jiangshi: Blood in the Banquet Hall 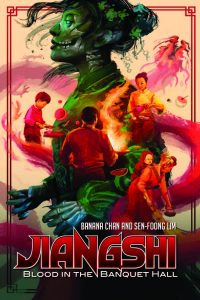 Banana Chan and Sen-Foong Lim are the lead designers on a new tabletop game called Jiangshi: Bood in the Banquet Hall, which launched on Kickstarter to become fully funded on Day 1. It’s easy to see why; her diverse team of authors and designers have crafted a unifying and enlightening cultural experience, utterly unique to the medium of tabletop gaming.

“Jiangshi: Blood in the Banquet Hall is about a Chinese family running a restaurant in the 1920s,” Banana says on this week’s episode of Making a Monster. “In the daytime they’re faced with oppression and the stress of having to run a restaurant and keeping up with their customers; at night, Jiangshi come out and they attack everyone. Jiangshi are hopping vampires and they don’t feed on blood – they feed on the chi of a person, the life force of a person.”

There are a few stories about the Jiangshi, but Banana has a favorite. “This Daoist priest was trying to carry bodies from point A to point B, trying to drag them along because they had to bury them in a proper burial site, and they realized that this is a lot of work. So they enchanted a bunch of bodies with some paper talismans, and the bodies started hopping towards the burial site behind the priest. And that was the easy way of getting out of doing this long chore. Unfortunately some of the paper talismans fell off their heads and that’s how we have the Jiangshi.”

Players have a character sheet like you’d expect from an RPG, but instead of a separate track for damage or “stress” from the jiangshi’s soul-sucking attacks, players cover up one of the eight slots containing the skills, items, hopes, and dreams they chose during the character creation phase.

“You could think of it as literally turning more and more into jiangshi or, if you were thinking about it in terms of an allegory it’s like they’re becoming more and more assimilated, or maybe enacting their fears of becoming assimilated into this new world,” Banana says. 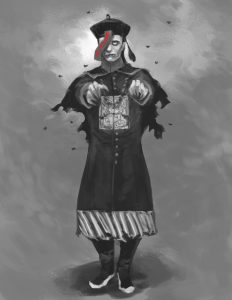 The characters’ tradition and culture figure in the game not just as an object to be protected, but also as a positive force that itself protects the family and the restaurant. “We have paper talismans characters will write on. They will come together as a family and write out a family motto, which will keep them safe from the jiangshi. When they stick these talismans on the jiangshi they’ll freeze in place, hopefully giving the family enough time to carry out their plan.”

Elements of Chinese culture are skillfully woven into the game. It uses pools of eight-sided dice to resolve player actions. Eight is a lucky number in Chinese culture, and four is an unlucky number due to its similarity to the Mandarin word for death. High numbers mean more successful rolls, and fours cancel out the highest number in the pool.

Jiangshi’s base game is set in San Francisco’s Chinatown, but Kickstarter stretch goals include other settings like San Francisco and Los Angeles, written by Ross Cheung; New York by Kienna Shaw; and Vancouver and Toronto by Daniel Kwan. The game also includes an adventure by Yoshi Creelman set in a Japanese internment camp, and a setting by Carl Pierre-Lewis based on a Haitian-American community.

Banana Chan and her design team tried to balance horror with comedy, a device often used in Cantonese horror movies like The Spooky Bunch. “I like to think of it sort of like a Bob’s Burgers meets vampires,” Banana says. “We tried to make it feel a little more hopeful so that it’s family-friendly and a little more approachable.” 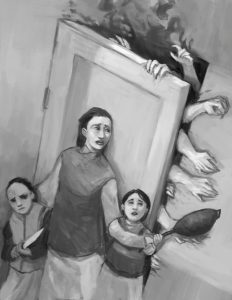 Jiangshi at the door. Artwork courtesy of Wet Ink Games.

It’s one of the ways in which this game helps its players interact with the real-world issues encountered by Chinese immigrants at the time. “Because it’s set in the 1920s, we do have a little bit of separation in terms of time and period, making things like the Chinese exclusion act easier for people to digest,” Banana explains. “We added the horror element because that adds another layer of separation where it’s like, okay, I understand that all this stuff is happening, but it still feels like we’re building a story together. It’s sort of like we’re watching a movie. Even though we are still encountering impression or systemic racism, we still have a safe space to sort of play in and understand more about what’s happening in the world.”

Jiangshi: Blood in the Banquet Hall is live on Kickstarter until Thursday, August 13th, and a Backer Kit will be available for late pledges. Follow Wet Ink Games and Game and a Curry on Facebook, Twitter, and Instagram to stay completely up to date on the game’s retail distribution.

A version of this article also appears on Love Thy Nerd: https://lovethynerd.com/jiangshi-lets-players-empathize-with-victims-of-systemic-racism/

Next Episode: The Heir of Orcus 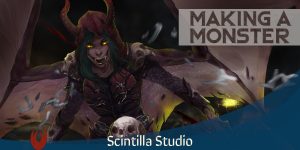 DM’s Guild designer Anthony Joyce shares his tragic villain the Heir of Orcus, daughter of the Demon Lord of Undeath in the Forgotten Realms. We discuss what is so powerful about a villain who can be redeemed in Dungeons & Dragons.