How to Make Minimalist Wallpapers in 7 Steps or Less

Turn any image into a minimalist composition with this seven-step process.

Minimalist art relies only on the most basic and distinctive elements of a design to create compelling images.  It’s the difference between left and right:

I discovered a simple seven-step process to make minimalist wallpapers after playing a lot of the much-lauded independent adventure game “Bastion.”  The rich story and immersive soundtrack have crawled inside my head to the place where inspiration begins.  As a tribute to the game, I’m going to start with this image, since it contains a single character and very little background.  And since I’m all about creativity on a budget, I’ll be using the free image design program GIMP 2.8.

1.  Pick the most important design elements to preserve.

This is where minimalist rubber meets the road.  You’ll be reducing the entire image to silhouettes in simple shapes, so you’re looking for the single most distinctive elements or the ones that provide the most personality.  Usually this is hairstyles, patterns, weapons, or logos, especially those closely associated with the character, brand, or landscape.  Interestingly, you almost never see full faces in minimalist work; eyes, eyebrows, or mouths are used, but rarely all together.

This minimalist animation is the work of graphic designer Christian Tailor.  The characters here are instantly recognizable, even though they’re all made entirely from a head on a rhombus.  Logos, colors, even jawlines figure prominently to distinguish the characters.  Also notice the subtle lightning flash that both embodies Batman and signifies the end of the loop.

2.  Select key regions one at a time and copy them to their own layers.

Now that you’ve chosen your distinct minimalist elements, trace over them in a layer-based image editing program like GIMP or Photoshop. The best way to do this is with a tablet like the Wacom Graphire, since you can literally trace over the sections you need.  Smooth out curves and straighten lines to reinforce the simplicity and power of the design.

If like most people you don’t have a tablet, you’re going to have to get handy with selection tools. These are the ones available in GIMP 2.8.: 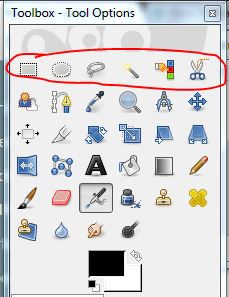 It’s best to get a rough outline with the Intelligent Scissors on the far right, and then edit the selection as a Quick Mask. 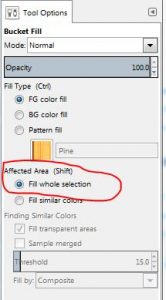 As you select the regions you need for your shapes, fill in the selections with a solid color.  This way you can easily select those regions again if you need to alter the shape.  Make sure to click the “fill whole selection” option from the Bucket tool menu – otherwise you’ll only be filling similarly-colored regions within your selection.  At this point, choose colors from the image using the dropper tool, so that you maintain the original color scheme and overall tonality.

4. Duplicate layers and merge down as you go. 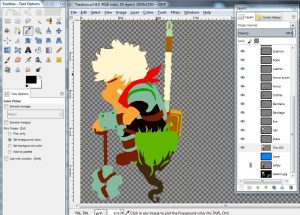 Obviously you’ll want each individual object in its own layer, but you’ll also want a layer where all of the objects are merged together.  This will help point out gaps in your selections and make it easier to edit the image or character as a whole.  Again, if you’ve filled each object with a single color you can easily select only that object with the color select or “magic wand” tool.

Undoubtedly there are some stray pixels lying around, and some silhouettes that don’t quite match their original shape.  You should be able to take care of these small details with the eraser and the paint brush.  You can be as detailed in this step as you want, but be careful of falling too far down the rabbit hole.  Pretty soon you’ll have a product you can be proud of, with flaws that only you, as your own worst critic, will notice.

You’ll want very few colors here, and you’ll want to pick ones that communicate cohesively.  I suggest using Paletton.com for inspiration.  Try more than one color scheme – you’d be surprised how much different the final composition will become just by changing the color.  Can you guess which color schemes I borrowed for this example? 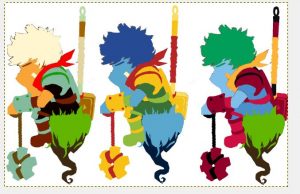 Often you’ll want to let one of your larger colors become the background, but I opted to give mine a little texture with GIMP’s plasma plug-in.

And that’s it!  It’s important to note that works produced this way are derivatives of original, probably copyrighted material.  Treat that material with the respect it deserves and always cite your sources. Check out http://theminimalists.deviantart.com/ to kickstart your inspiration with more minimalist art.

What game or property do you think would make a good minimalist wallpaper?  Let us know in the comments below!