How to NaNoWriMo: 7 Point Story Structure 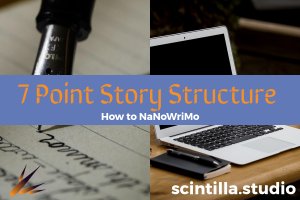 There are more methods to plotting a story than I can count.  This year, I’m trying a new-to-me method for planning my NaNoWriMo story: Dan Wells’ 7 Point Story Structure.  Never heard of it?  Neither had I.

What is the 7 Point Story Structure?

The 7 Point Story Structure helps chart the rise and fall of a story.  It’s an outline structure that only takes seven steps to get the big picture of your plot.  Here’s how it works:

Start with the Resolution

If you don’t know where you’re going, it’s hard to know how to get there.  This applies to both the main story and the subplots.  The resolution doesn’t have to be the last pages of your story, though.  The resolution is where the ‘big problem’ of the plot or subplot is resolved.

If this doesn’t make sense right away, that’s okay.  Here’s one way to think of it: a murder mystery ends with the killer getting caught.  Everything else in the story leads up to this goal.  And if you don’t know who the killer is, how can you plant clues?

Even if you’re not writing a mystery, there are still going to be things that you need to hint at.  Figure out where you’re going, and you’ll have an easier time mapping the path.

Hook Them From the Start

Once you know where you’re going, you can figure out where you start.  What’s the problem that your characters need to solve?  How does it start?  And most importantly, why should we care?  This is your Hook.

Your Hook doesn’t have to take your character from weakness to strength.  It can take them from one strength to a different strength.  There’s something that needs to change to take you to your resolution.  Once you find that, you have your Hook!

Your story structure isn’t going to be much with just a beginning and end, and no middle.  Yes, it might feel a little strange to jump around like that, but go with it!  This is where everything is going to change.

No, really.  According to Dan Wells, the Midpoint is when your characters go from reaction to action.  This is going to be the turning point.  The characters need an inciting incident to push them into action!  This may not be exactly in the middle of the story and it may be more than one scene, but it should be the turning point of your story.

Plot turns move your plot structure from one point to the next.  There are two Plot Turns in the 7 Point Story Structure.  The first Plot Turn is when you character’s world changes.  This often happens early in the story – Frodo finds The Ring, Buttercup gets kidnapped.  This Plot Turn moves you from the beginning towards the Midpoint.

The second Plot Turn is when your character finds the final thing that they need to fulfill their goal.  It can be something external (the final clue) or internal (the Force).  This is where your characters yank out a victory at the last possible moment.  It moves you from the Midpoint to being within grasp of the Resolution.

The first Pinch forces the characters into action.  This is often where you introduce the villain, inherently putting pressure on your characters.  This Pinch shows your readers what the characters are going up against.

The second Pinch applies enough pressure that the reader should be on the edge of their seat.  It should look hopeless, but since you know the Resolution, you already know how they’re going to get out of the situation!

Putting It All Together

Now is when all of the story structure elements go together, in order:
Hook, Plot Turn 1, Pinch 1, Midpoint, Pinch 2, Plot Turn 2, Resolution.

This isn’t the end.  There’s still fleshing out to do; you can’t have a novel or screenplay with only 7-10 scenes, after all.  But the 7 Point Story Structure is a great beginning!

Have you tried the 7 Point Story Structure?  Or do you use a different plotting method?